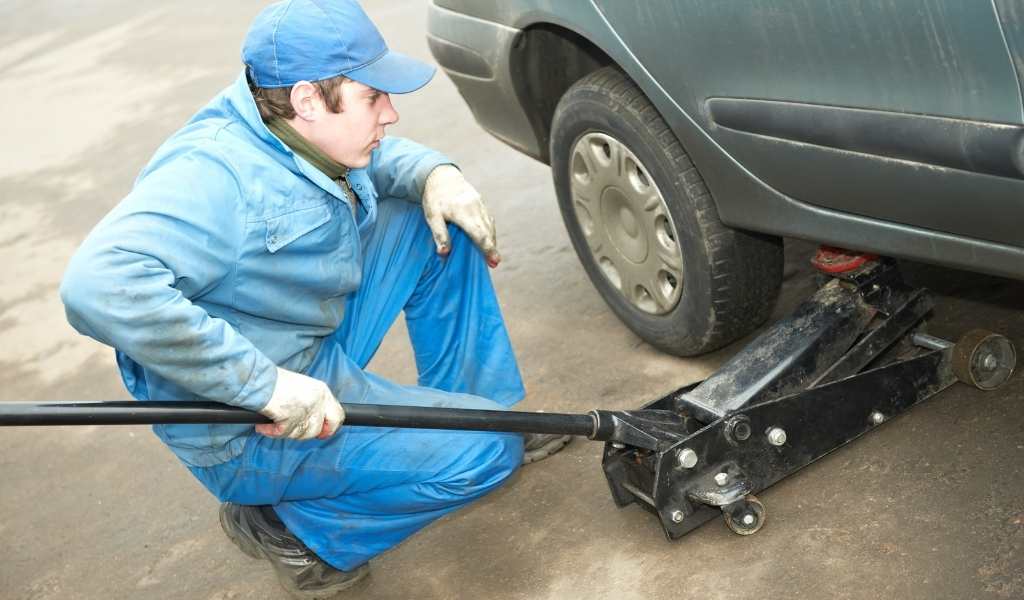 Little did you know, there are a raft of different types of floor jack, from the typical trolley style jack with wheels, to scissor jacks that you might find with a spare tyre and the lesser used bottle jack.

In this guide, we’ll share some information about the different types of jack, how they work and the best use scenarios for each.

Before we share which type of jack is best, we’ll first run through the three main jacks (trolley, scissor and bottle) to give you and overview of each:

What is a Trolley Jack?

A trolley jack is a type of hydraulic jack that uses a long lever to raise and lower a vehcile.

They are commonly used in a professional car work shop, as they are heavy and robust so will last through continued use. The wheels make it easy for the jack to be passed around the work shop or garage safely and efficiently.

They are also used by amateur mechanics in a home garage when work needs to be done under a car.

A jack that can hold up to two tonnes is ideal for small cars and a three tonne jack is ideal for SUVs and 4×4’s.

What is a Trolley Jack used for?

Trolley jacks are used to lift a car, so it may be used to change a tyre, or to help aid any other type of mechanical work.

A trolley jack works well because, it safely lifts a vehicle with minimal effort. It is important to note that when using a trolley jack, it is a good idea to use an axle stand as hydraulic trolley jacks can sink after some wear and tear and the stand works in cohesion to support the lift of a vehicle.

How to Use a Trolley Jack

1. Make sure the car is in neutral, with the handbrake on. It also helps to use a wheel chock, to keep the vehicle securely in place.

2. Locate the jacking points of the car, this information can normally be found in the vehicle handbook.

3. Place the trolley jack head under the jacking point and use the lever to pump until the saddle of the trolley jack touches the lifting point of the vehicle. It’s important to ensure the jack is safely positioned, so it’s not likely to slide.

5. Lower the vehicle, once the repair or maintenance has been completed. Raise the jack, so the axle stands can be removed and then open the release valve by turning it anti-clockwise.

What is a Scissor Jack?

A scissor jack is compact in size and it is usually included in a spare wheel set up. This is one of the simplest and cheapest forms of jack, you will recognise it because it’s in the shape of a ‘Z’.

Scissor jacks are manually operated, as you twist the main bolt, it opens or closes the contraption which in turn raises or lowers the car. However, there is also a growing interest in electric scissor jacks which work in the same way, although it takes the hard work out.

What is a Scissor Jack used for?

This type of jack isn’t designed for long term use and it should only be used when needed, for instance if a tyre needs to be changed on a roadside.

How to Use a Scissor Jack

1. Make sure the car is in a good location so this means there is no slope and it is not on a dirt track, a pavement is the ideal ground surface.

3. Attach the lever to the jack and twist, this will raise the vehicle.

4. Once the mechanical work has been completed, turn the lever anticlockwise to lower.

What is a Bottle Jack?

A bottle jack is vertically positioned, and it is generally used to jack up high vehicles, such as: 4X4s and trucks.

Like a trolley jack, hydraulics are used to assist an efficient lift. Bottle Jacks can be used for long term purposes and they are sturdy in their build, making them much more reliable and safer to use than Scissor Jacks.

The type of bottle jacks used in garages will be pumped by hand, however there are also air powered hydraulic pumps available

What is a Bottle Jack used for?

A bottle jack isn’t just used in a car garage but can also be used for industrial purposes, such as lifting heavy material in warehouses. This jack is therefore multifunctional and is ideal for consumer who have high up vehicles or work in the industrial or construction industries.

How to use a Bottle Jack

1. Ensure the car is in neutral, with the handbrake on and use a wheel chock to make the process extra safe.

2. Locate the vehicle’s jacking points, if it is uncertain check the owner’s manual and this will help.

3. Screw the bottle jack screw up until it touches the jacking/lifting point.

4. Lock in the handle valve and turn it clockwise until it feels tightened.

5. Pump the handle until the vehicle reaches the desired height.

6. When the car/van needs to be lowered, turn the valve anti clockwise and this will lower the vehicle.

Which Type of Jack is Best?

In all honesty, it really depends on what you intend to use the jack for, if you aren’t someone who is likely to need to lift a car very often, then a scissor jack is OK, even though trolley and bottle jacks are safer and of higher quality. Here is my opinion of the ‘best to worst’ jacks:

What is Tyre Shine? Is it Bad for Tyres?

Is It Safe to Change a Tyre on an Incline?